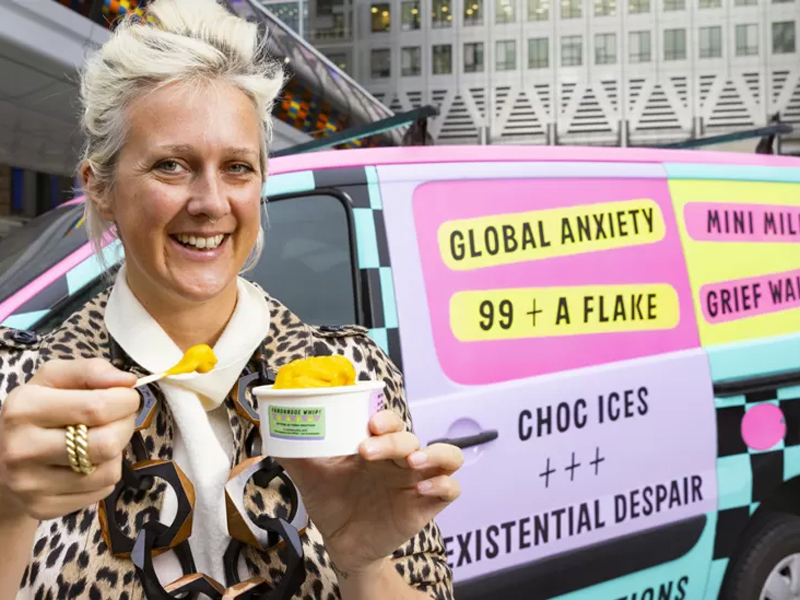 Artist Annie Nicholson believes a good place to start a conversation about loss is over a scoop of ice cream. Her work has centred around grief since losing members of her family in a tragic accident 11 years ago.

The sweet, soft, sugary taste of ice cream does not usually sit alongside the pain and devastation of grief. Yet Annie Nicholson’s ice cream van was designed to break a taboo.

Annie, 38, from London, had the idea for the van when the Covid pandemic struck. She wanted to encourage conversations about grief – something she already had experience of.

“It was just unreal. Someone tells you your whole life as you know it is over and you can’t compute that.”

Four members of Annie’s immediate family had been involved in a tragic accident in New York.

Her parents, Harriet and Paul, had travelled there to celebrate her sister Sonia’s 40th birthday. Sonia was in the city with her partner, Helen.

“It was a surprise for Sonia that my parents were going,” says Annie – who had also been due to fly out, along with her sister Amanda. But, because of work commitments, both had to cancel at the last minute.

Harriet, Paul, Sonia and Helen had boarded a helicopter to take a sightseeing trip around the city – but just after take off, the aircraft crashed into the East River.

Paul had been sitting in the front. After freeing himself from the wreckage, he tried to search for his family in the blackness of the river.

“They had to pull him out of the water in the end because he just wouldn’t leave them,” says Annie.

Sonia had died instantly, while Helen and Harriet were taken to hospital. A week later, Helen died. Harriet died four weeks after that.

Paul had been diagnosed with terminal cancer several years before the New York trip. He survived the accident, but died in 2016.