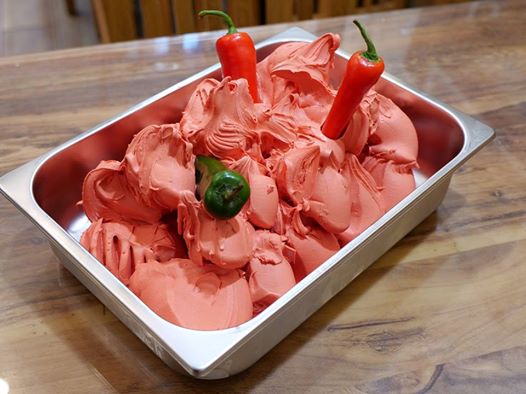 The Aldwych Cafe claims its special gelato acts as an intense aphrodisiac. However, the cold treat is so hot lovers are asked to sign a waiver prior to licking it.

The Scottish cafe’s concoction is billed as one of the spiciest ice creams in the world. With a Scoville rating of close to 1.47 million, Aldwych’s “Respiro Del Diavolo” (Devil’s Breath) gelato is roughly 300 times hotter than a jalapeno.

As a result, Aldwych requires brave creamery connoisseurs to be at least 18 years old before they sample the red, creamy, and sometimes painful treat. A required waiver informs clients they risk “personal injury, illness and possible loss of life” if they consume the Devil’s Breath.

According to the New York Post, Lee Bandoni, the brother of the Cafe’s owner, said the secret dish started in Italy back in 1936.

“There was a place called Devils Bridge and with that, the Italian ice cream families used to meet up once a year and discuss how the year went for them,” he said.

“At that point, if there were any men that showed bravery then they would eat this ice cream. So, because of the Devils Bridge, they called this the Breath of the Devil.”

Cafe employees are required to wear gloves when handling the eye-watering ice cream.

A lot of Italian guys go and have a romantic evening with their girlfriends or wives and they will have some (of) this ice cream because it is a well-known fact that chili is an aphrodisiac and it is nice with a glass of wine bubbling in your mouth,” Bandoni added, according to the Post.